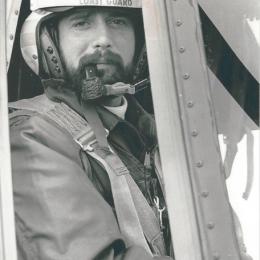 Christopher Jon Snyder passed away peacefully, after a grueling battle with Glioblastoma, on September 13, 2020, at the age of 71 surrounded by his loving family. Chris led an honorable and dignified life helping those he met with a magnetic smile and a warm heart. Chris was born on October 12th, 1948, in The Bronx. His family later moved to Yonkers where he was raised. Chris attended St. Francis Xavier High School and Cardinal Farley Military Academy, which he graduated from in 1966. He graduated from Norwich University in 1970 and earned a Masters of Science in Aeronautical Engineering from Boston University in 1974. He also earned two graduate certificates in program management from George Washington University. Three weeks after graduating from Norwich he married the love of his life, Cathy Marcello, and in 1971 their first son, Keith, was born. Their second son, Corey was born in 1974.

Chris entered the U.S. Army as an officer in 1971 and, pursuing his dream to be an aviator, he entered flight school and became a pilot. His first duty station was at Fort Bragg, North Carolina, for two years and while there he was deployed to serve in Korea from 1974 to 1975. After six years in the Army, he chose to continue to serve his country in the U.S. Coast Guard where he accepted a direct commission in 1977. Chris stood his initial watch at CGAS Chicago located at Glenview Naval Air Station, Glenview, Illinois. From that Air Station he was deployed to Miami to take part in the Mariel Boatlift, rescuing Cuban refugees.

While in Illinois his two sons, with the support, coaching, and encouragement of their father, began a spectacular life in youth ice hockey, speed skating, baseball and racing road bikes. At his second watch in Mobile, AL, he was assigned to the Polar Operations Division as the Engineering Officer, and completed two deployments to the Arctic and two to the Antarctic. He continued encouraging his sons in various sports including running distance races with them and Cathy. Chris’s third watch was at CGAS Borinquen, Puerto Rico, where he served as the Engineering Officer and his family explored the ocean as certified SCUBA divers and assisted with the development of youth soccer on base as well as supporting a local Baseball league off base.

Chris and his family then transferred to Coast Guard Headquarters and lived in Northern Virginia where his two sons graduated High School while also excelling in High School Athletics. Chris’s son Keith graduated from the U.S. Merchant Marine Academy, one of the lesser-known service academies, and Corey graduated from Virginia Tech and its Division One baseball team with great success. After living in Northern Virginia for five years Chris was then sent back to ATC Mobile for three years, and then on to the Aircraft Repair and Supply Center in Elizabeth City, NC, where he was the Chief of the Engineering Division. After that, Chris was sent to CGAS Cape Cod where he served for two years as the Executive Officer, and then finally to his last duty station at Coast Guard Headquarters where he was involved in the Coast Guard’s Deepwater project.

After retiring from the Coast Guard, Chris and Cathy settled in Gainesville, VA, and Chris worked for Agusta Westland, Cineflex, General Dynamics, and also as a consultant to the Government of Trinidad and Tobago, where he worked closely with the Director of the ITT unit of the Ministry of National Security and managed the migration of the analog 911 public safety system to a fully digital infrastructure. While in Trinidad he also developed a love of Soca music.

Chris was and still is an inspirational uncle to all his nieces and nephews. Chris and Cathy became extremely happy grandparents to Corey and his wife Chelsea’s two children. Chris became a model railroad enthusiast, model ship builder, developed one of the most amazing Koi ponds that has ever existed, and also owned and hunted with his award winning German Short Haired Pointers.

His family was devastated to see how Glioblastoma stole his essence and abruptly ended his life after a nine-month fight with the disease. Chris is survived by his wife of 50 years, his two sons, Keith, Corey and his wife Chelsea, sister Carey (Gangitano), mother Marian (DiMarco). His father, Edward Snyder, precedes him in death.

In lieu of flowers or expressions of sympathy, memorial contributions may be sent to: Adding Candles, PO Box 10717, Rochester, NY 14610. This is a grassroots volunteer organization specifically formed to support brain cancer research.