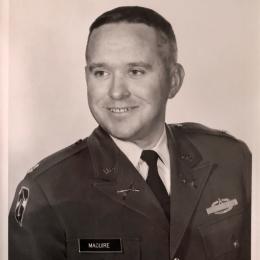 Lt. Col. Maguire was born and raised in Brooklyn, New York. He attended St. Augustine High School and graduated in 1952 from the City College of New York, where he majored in history.

A decorated veteran, he began his military career in the Reserve Officers Training Corp (ROTC).  As a career army officer with 20 year of service, he served combat duty in the Korean conflict and the Vietnam War, with additional tours in Turkey and Germany.  In addition to combat duty, he managed the 7th Army Symphony during their tour of Europe; spent a year at the U.S. Army Language School in Monterey, where he learned Greek; and trained National Guard units in Fort Wayne, Indiana and Duran, Oklahoma.  In 1993 he had the great honor to be invited by the Black Veterans for Social Justice to join their delegation as an ally, returning to South Korea for an official government visit.

During his military career, Lt. Col. Maguire was the recipient of several medals and awards including the Purple Heart for injuries sustained in Vietnam, four Bronze stars, and the Gallantry Cross. He retired from the military in 1973.

Following his military career, Frank returned to work first for the State of New York – Veterans Reemployment Division and then later for the Veteran’s Affairs Division of the Federal Government. During that portion of his career he focused on helping veterans find employment, housing, and recovery -- especially those who were unemployed, homeless, disabled or struggled with addictions.

In June of 1976 he married Maureen Reidy in Brooklyn, NY.  As a couple, Frank and Maureen loved to travel, read, attend the theater, ballet and opera, visit museums and compete on who could do the daily NYT crossword puzzle faster.  A hands-on father and grandfather, Frank loved to attend his children and grandchildren’s school events, ceremonies and sporting events.

In 1990 Frank and Maureen moved to Wilton, CT, where Frank became active in the community including his parish of Our Lady of Fatima, the Kiwanis, The Retired Officers Association, the Knights of Columbus and Catholic Charites. In recent years, Frank and his Wilton “guys” could be found sipping coffee in town while “solving the world’s problems.”

Due to the current need for social distancing and COVID restrictions, Frank’s children will hold a private burial, with the hope of funeral mass at a future date.  In lieu of flowers, donations can be made in Frank’s memory to CHiPs (Community Help in Park Slope, Inc.), a Brooklyn soup kitchen.