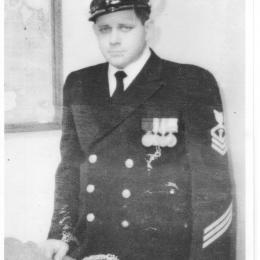 James Henry Tait Bryson, Jr. passed away at the age of 89 on September 9, 2021. James was a retired U.S. Navy chief petty officer hospital corpsman who served with the Marines in the Korean and Vietnam wars. James attended Rutgers University, before leaving to enlist in the U.S. Navy in 1951. While stationed in Yokosuka Japan he met and married his wife of 50 years (Masako Uehara). He developed a rich appreciation for Japan’s history and culture.  Following his retirement from the Navy James went on to become a registered nurse working for San Diego County, and received his Bachelor’s and Master’s degrees from National University in behavioral health and education.

He grew up in Neptune, New Jersey and was the son of the late James Henry Tait Bryson, Sr. and late Margaret (Certo) Bryson, and was preceded by his wife, Masako (Uehara) Bryson, who passed in 2004 and great grandchild Maia Hitome Langley.

James was a lover of books and nature. He especially enjoyed literature and writing.  As an admirer of fine writing instruments, Pop was always in search of the perfect pen.

He is Survived by his four children, Henry Bryson, Margaret Bryson-Langley and husband Michael, Amelia Felmly, and Roger Bryson.