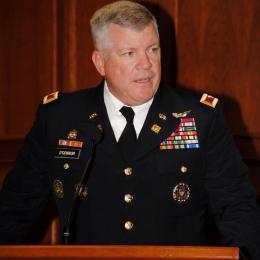 Colonel (Ret.) Richard B. O’Connor, II, died unexpectedly on March 6, 2022 in Lakeland, Florida. Richard was raised in Needham, Massachusetts. Following his graduation from Needham High School in 1976, he enlisted in the U.S. Army as a helicopter crew chief. He was first assigned to the 4/7 Cavalry Regiment, 2d Infantry Division, in South Korea and then to the 101st Airborne Division (Air Assault). In the summer of 1979, he completed his active-duty enlistment, joined the Army National Guard, and used his G.I. bill benefits to attend Northeastern University, Boston, MA. He participated in the ROTC program and received a BBA in Business Administration.

Rich was a graduate of the Naval Postgraduate School, Monterey, CA and the National Defense University, Eisenhower School, Washington DC.

A Mass and burial will be at Arlington National Cemetery, Washington, D.C. on Friday, July 8th @12:45pm.

In lieu of flowers, the family requests that in Colonel O’Connor’s name, donations may be made to Parker’s Platoon (Parkersplatoon.org).