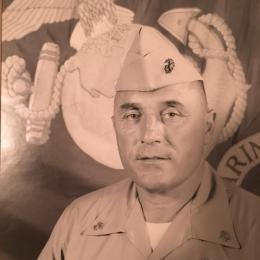 The family of Warren “Lou” LeGarie is saddened to announce the passing of their loving husband and father.

Lou was a Navy Corpsman who spent 30 years in the service of our country fighting alongside his Marines and wearing the Marine uniform for 29 of those years. He was a highly respected and beloved American warrior and hero by all those who served with him, and for whom the Marines claimed as their own.

During his military career, he fought in WWII, China, Korea, and Vietnam and was awarded the Silver Star, the Bronze Star with Combat V, the Navy Commendation with Combat V, Purple Heart with star, the Cross of Gallantry with Silver and Gold Stars, the Republic of Korean War Service Medal, the Presidential Unit Citation with 5 stars and 19 service ribbons and the Navy League Award.

Born in Warwick, Rhode Island, Lou joined the U.S Navy at age 17 because he was too young to join the U.S. Marines. He served briefly aboard the USS Nitro before reporting to the Field Medical Service School at Camp Lejeune, NC in 1943. In WWII he served with Recon Company, 6thMarine Division in the battles of Guam and Okinawa, and after the war served in China for three years with the 3rd, 4thand 5thMarine Regiments before returning for duty with Fleet Marine Force, Pacific Headquarters in San Francisco.

During the Korean conflict, he earned the Silver Star and Purple Heart with the 1stBattalion, 7thMarines for his heroic efforts as they fought their way out of the Chosin Reservoir. Wounded, he refused to be evacuated, choosing to stay with his unit and care for his Marines. Later he served with the 11thMarines before returning to the States. In between the Korean and Vietnam wars, he served with the 1stMarine Division at Camp Pendleton and the 3rdMarine Division in Okinawa.

In Vietnam, Lou served with the 2ndBattalion, 5thMarines at An Hoa, Phu Bai and in Hue City during the 1968 Tet Offensive, earning the Bronze Star with V, Navy Commendation with V, Cross of Gallantry Silver and Gold Metals.
His last tour was at Kaneohe MCAS (KMCAS) from 1968-1972 as the Chief Master of Arms at the station dispensary. During this tour, he also volunteered as a trainer for the Kailua High School football team.

In 1996, he moved to San Francisco where he worked as a census taker and finally retired at the age of 80 after working for many years at the Redwood City DVM.

He is survived by his wife Hiroko, his children Warren LeGarie, Ann ODonnell, and Shana Arivett, and brother Leo LeGarie.

He will be buried at the Miramar National Cemetery on October 6 at 10:30 am.

Correspondence to the family can be sent to legarie25@hotmail.com.