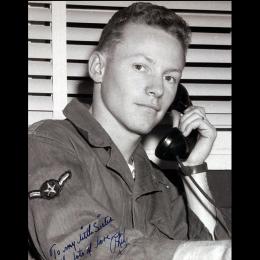 Philip Reece Scoggin was born Nov. 15, 1933 to Esther Sewell Scoggin and Reece Scoggin, in Decatur, Texas. He was joined by his sister Sue a year later, to live with their grandmother Ann Scoggin, and then follow their father to Albuquerque, N.M., Gardnerville, Nev., and Benbow in the Redwoods, eventually joining their mother with their stepfather Harold Stewart in Eureka, Calif. for high school. Phil joined the United States Air Force (U.S.A.F.) at age 17 and was transferred to Columbus, Ohio, where he met Joan Veronica Miller at a United Service Organizations (U.S.O.) dance at Lockbourne Air Force Base. They hit it off, dancing the jitterbug all around Columbus, and marrying at St. Patrick Church on Feb. 7, 1953.  The Scoggins moved with their firstborn, Rebecca, to flight school, officer training and stations in San Antonio, Texas, Mariana, Fla., Wichita Falls, Texas, Riverside, Calif., and then Yakota, Japan for six years. Phil began his Air Force career as a photographer, but was involved with photo reconnaissance in Japan with the 67th Reconnaissance Technical Squadron (“67th Recky Tech”), where Phil rose in rank, and the family grew with two more children: Sam and Matt. Phil also studied Russian and worked toward his degree in history. Upon their return to the states, Phil took the family camping through most of the country’s western national parks on their way to six months in Nebraska., where he received his degree in history at the University of Nebraska Omaha (UNO). Phil was then stationed at the Pentagon in Washington, D.C., and later, Vietnam. When he returned to the states in the fall of 1971, Phil joined his former colleagues from Japan at Texas Instruments in Austin, Texas, retiring from the U.S.A.F. as a Major. Phil continued military support with government contracting agencies in D.C., before fully retiring. He enjoyed an active retirement with Joan on Lake Anna in Virginia and Lake Travis in Austin, traveling with Joan and watching their children and grandchildren compete in their many sports. Phil built the first Little League field in Leander, Texas, while coaching his sons’ baseball team, and proudly cheered them on through baseball, track, gymnastics, football, basketball, swimming and diving - from the Pee Wee leagues to the Olympics (Matt, 1992). Phil ultimately circled back to Texas, where he passed away at home with his family by his side on Feb. 23 in Lago Vista. It was just two weeks past his 69th wedding anniversary, which commemorated an inspiring, love-filled, romantic and fun marriage with Joan. He is survived by his sons Samuel Albert (Kathy) Scoggin and Mathew Aaron (‘Becca) Scoggin and his daughter Rebecca Ann Scoggin McEntee, as well as three grandchildren: Sierra Wright Scoggin, Shane Hunt Scoggin, and Grace Run Tong Scoggin. Major Philip Reece Scoggin will be buried with honors at Arlington National Cemetery in Virginia at a date yet to be determined. Expressions of sympathy may be sent to the Lago Vista Volunteers, at P.O. Box 4983 in Lago Vista, TX, 78645 and/or the U.S.O.